Or, Proof Of Ghosts At Idaho High School 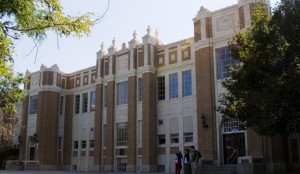 As if becoming a freshman isn’t a scary enough prospect for many students, Pocatello High School, located in Idaho, has the added fear factor of being haunted. And recent surveillance footage taken of the empty school over winter break when the hallways were empty, seems to support the idea. What the school’s surveillance footage captured has left even paranormal investigators saying, “Wow,” and referring to it as “incredible.”

The surveillance footage of the school’s empty hallways show lights being turned off and on inexplicably, and a strange, floating figure is seen moving back and forth near a doorway. The ghostly figure is as tall as a person, but doesn’t appear to resemble anyone in particular.

Admittedly, there is a chance that the ghostly sighting is nothing more than something hanging in front of the camera that is slightly out of focus — but that still doesn’t explain the lights being turned off and on mysteriously. The activity with the lights was actually so intense that police were notified, thinking that someone was in the closed building — but, of course, no one was found.

The video footage of what may be a ghostly figure is just one more of many reasons why people believe Pocatello High School is haunted. And if you don’t believe the students, the janitors, teachers, and school officials are more than willing to back the claims up, with Pocatello High School officials saying that the footage shown in the video below is just a slight sampling of the many examples of haunting that have occurred in their school.

There are even a number of teachers and janitors who refuse to be left alone in the school theater — and they refuse to be left alone because of a dark shadow that reportedly looms in the rafters of the room. Other people have reported hearing inexplicable whispering, toilets flushing in empty bathrooms, and sounds of a piano being played on its own.

The numerous reports of paranormal activity at the high school eventually caught the notice of nationally-renowned paranormal experts John and Lisa Brian, who are also the co-founders of the Scientific Paranormal Investigative Research Organization (SPIRO). They actually live in Pocatello, Idaho, and they were sent in to investigate.

As for the footage, the two examined it in detail, saying that the footage is raw and untampered — the fact that it is surveillance footage means that it cannot be edited, not just because of legal regulations but because it has a secure design.

“We have watched it multiple times and even slowed it down and really analyzed it. It’s a really great piece of footage,” Lisa said. “You can just see the lights going on and off, the police were called because of these issues going on in the building — all of that just goes to show that it wasn’t something someone just put on there, but instead it was something that really happened.”

And during their investigation, some of the couple’s equipment went missing. It was found a week later by a janitor — on a window sill in a stairwell, which is so high that no one could have reached it without a ladder.

John and Lisa Brian sifted through the many myths and legends of Pocatello High School, and were able to confirm that at least six deaths occurred on the school grounds, including a boy who drowned in the school’s pool.

“Pocatello High School has an incredible history, and so this really opens that door to be able to talk about Pocatello High School and talk about its history and the history of our town,” Lisa said. “That’s really important to us as well, because we want to be able to share all of that stuff since we all live here, we all love our city, and so this is kind of a cool way to open our door to some history.”