Or, Why Samuel Eto’o Was Warned About His Recent Purchase 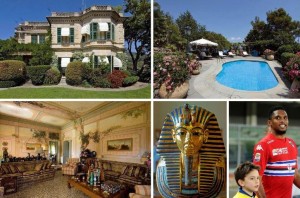 The former Chelsea and Everton striker may already be regretting his £18.5 million outlay after learning the tragic fates of his new home’s previous inhabitants.

Sampdoria forward Samuel Eto’o has a new £18.5 million mansion in Genoa – but an Italian newspaper warns it could be haunted!

The Cameroon striker has apparently acquired a new 30-room property, Villa Altachiara, in the port city, a 19th Century home with views of Ligurian Riviera.

However, Corriere dello Sport has a warning for the former Chelsea man, claiming that a curse lies upon the house.

The villa was built by George Herbert, Earl of Carnarvon, an Egyptologist who discovered the tomb of Tutankhamun.

Herbert’s nephew was killed in the villa when he fell down a flight of stairs, and in 2001 Francesca Vacca Agusta, the owner of the house was found dead in mysterious circumstances after disappearing from the cliff-top home.