Review of Monster by Carmen Caine

Or, My Take On Caine’s 1st Cassidy Edwards Novel 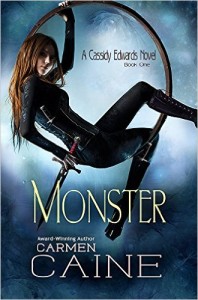 Revenge. It’s all I’ve lived for. Revenge against those who stacked the cards against me from the start. But I’m changing the deck now. I’m getting even. Born to a vampire, I wasn’t supposed to survive—but I did.

My name is Cassidy. Cassidy Edwards. And I’m the first of my kind.

The Job
Trapping a sixteenth-century Scottish Highlander of a vampire who just might be seduction itself.

The Team
A firedrake with an attitude, a werewolf with a problem, and an imp in dire need of rehab.

The Boss
A dangerously powerful warlock as handsome as sin.

My Problem: Bluffing my way into a job, my first mission into the Charmed world opens a Pandora’s box of betrayal and secrets … along with attractions of the most lethal kind.

I’m always on the lookout for great new paranormal series to read, so I was excited to start Monster. The writing is wonderful and Caine’s world is both fun and scary. There are opposing supernatural factions and lots of creative new monsters along with the traditional vampires and warlocks. I wish the secondary characters had more depth, but perhaps that’s coming in the following novels.

My biggest problem with the book is Cassidy slips into passive Mary Sue territory. As I was reading the big showdown scene it occurred to me that Cassidy didn’t DO much. She’s kidnapped, she’s threatened, and she’s carried around by strong men, but she hardly does anything to change her situation or advance the story. Instead, she’s advanced by others. But if you can forgive Caine for not making her heroine more dynamic, she’s created an intriguing new paranormal world.