Or, Step Inside The Essex County Jail–If You Dare

Written by Jack Williams in March 2016 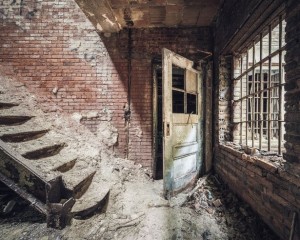 With its long history of haunting and a ghost that is not afraid to go bump in the night, it’s a wonder anyone would want to spend time in this former jail.

But that’s exactly what an abandoned location photographer has done, spending time in this haunted facility capturing a series of spooky images.

Will Ellis visited the creepy cell block, which still contained the remains of furniture and messages in graffiti.

It is a hot bed of paranormal activity with many reports of cold spots, shadowy figures and disembodied footsteps.

And according to Ghost Eyes blog while it was closed down for public use years ago – there’s still a few remnants left over from the past.

It says: “A former security guard tells the story of an “Old Man Brown” who still watches over the cell blocks.

“It is believed that this is the spirit of a former warden. There are many places where people get the feeling that they are not alone in small spaces, or that they are being watched, and these instances are usually attributed to the ghost of Old Man Brown. 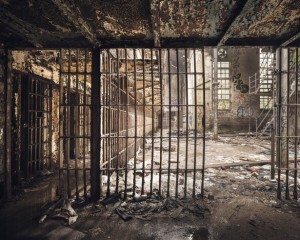 “Perhaps concurrent with this haunting, people can often hear phantom footsteps close to the old warden’s quarters, which was always patrolled regularly by guards.

“The most flamboyant story about Essex County Penitentiary is the inmate in the Central Hall who managed to commit suicide by lighting himself on fire.

“How the man managed to pull this off is still a mystery, but fire had consumed 90% of his body.

“There is still a charred mark on the concrete outside the cell in the shape of a man in the fetal position, which is typical in burning deaths.

“The spirit that is said to haunt this section of the jail seems to be angry and violent, as this is where abusive EVP’s has been captured and pushes and hair-pulling have occurred.”

The jail was closed in 1970 and has since become a haven for abandoned photographers who document its decaying state.

Photographer Will, 26, said: “The place is completely overgrown, so you really can’t get a good look at the building from the outside, and half of it is in ruins.

“But when you first enter the cell block, it’s breath-taking.”

The jail – which was also known as the Newark Street Jail – is the oldest building in the county, and was once used to shoot scenes in the 1991 movie Malcolm X, which starred Denzel Washington.

A fire broke out in the abandoned jail around 10 years later, and today it is a location for squatters and drug dealers.

Will added: “You could immediately tell the place was inhabited, and most of the cells had evidence of squatters – clothing, junk food wrappers and garbage.

“I was inside for several hours and I did run into several men who were living there, for the most part they were friendly and respectful.

“I can understand why a place like this would be more attractive to someone in their situation than living on the streets or the shelter system – here, at least, they have some degree of privacy and freedom, and a space they can call their own.

“For me it’s also about capturing the mood and spirit of the place.

“That mysterious atmosphere is what initially drew me to these buildings, and that’s ultimately what people are responding to.

“Once I draw people in with the visuals, they’ll usually stick around long enough to hear a bit more about the history, which is often just as compelling.

“In a place like this, I want to tell the story of the structure itself, as well as the people who lived within it.”