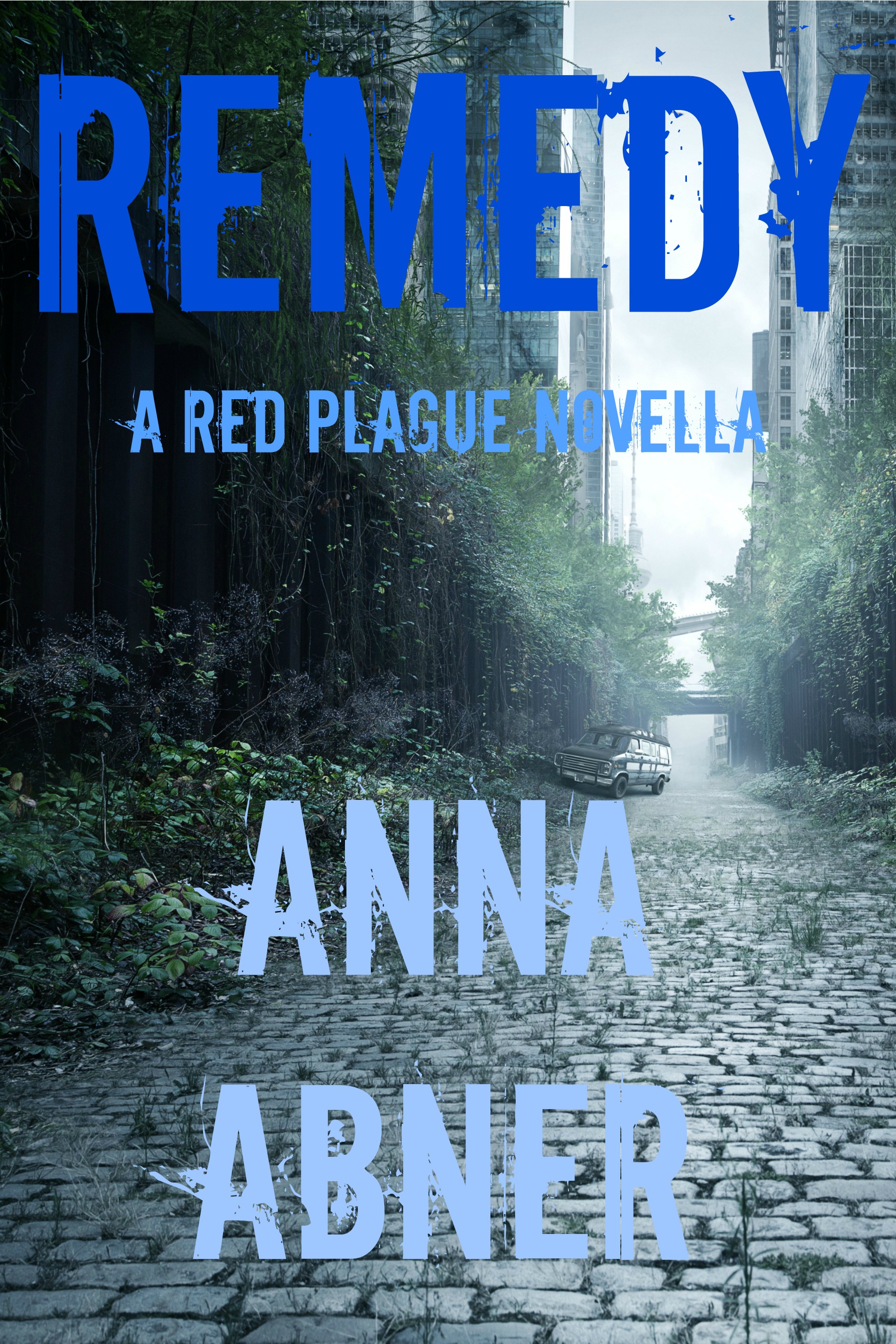 Enjoy this free peek into the Red Plague series!

Seventeen-year-old Callie Crawford is used to fighting. She was an all-star wrestler in high school, and since 212R destroyed her world, she hasn’t stopped fighting. When her high school boyfriend Levi caught the virus, Callie saved him by keeping him chained in a rural North Carolina barn, waiting for something to change.

Before 212R, Roman Duran was a computer nerd, but since the virus, he’s become a guard in the survivor enclave in Washington, DC. After volunteering for a rescue mission, Roman has been belittled, robbed, and left for dead. He hasn’t saved a single person.

Until he stumbles across Callie. Because she has a zombie on a short leash, and Roman is carrying a syringe full of zombie cure.

Callie and Roman will face soulless survivors and rabid zombies on their journey to save a single infected. Along the way, Callie will have to choose between her past and a whole new future.

The sky was gray and hazy when Callie Crawford pushed her skiff into the cold Atlantic, the surf lapping quietly against the hull. She glanced up from her compass, not liking the look of the clouds on the horizon. A warm breeze thick with salt and moisture blew through her ponytail and teased her bare arms.

A storm was the last thing Callie needed. Dad had taught her a few things, but she was no sailor, and the strength of the tides and currents always took her by surprise.

As if things weren’t messed up enough by her oversleeping.

Today was Levi’s day. Every third day since the apocalypse was his, and she’d never missed a visit, never been tardy venturing onto the mainland where packs of slobbering, mindless people infected with the 212R virus ruled. Not once. But she’d overslept, and now she’d be late arriving. Worse, she’d be late returning to her newly acquired private island in North Carolina’s Outer Banks. She may be forced to sail home in the dark.

Water splashed the side of the skiff as she maneuvered it over a mile of ocean. She’d been making the same trip every three days for the past two months, and she still thought she was going to die every time she lost sight of land and nothing but azure water hemmed her in.

She sailed past one of the department of transportation’s huge white ferryboats, immune to the reminder of a lost world. People didn’t use ferries anymore, and it had been left to rot. The vessel had foundered some time ago with all its vehicles still aboard. It jutted half out of the water, quiet and still, its once bright colors slowly being eaten away by rust and barnacles.

She palmed her compass, adjusted the sail for speed, and headed west. By keeping the buoys in sight, she steered her skiff straight into the port at Morris Marina.

Callie secured the ship and then pulled a marble and her slingshot from a pocket, looking for signs of trouble. No birds chirping. No dogs barking at strangers. No squirrels climbing branches. Nothing. She could have been the last creature alive on the earth.

Watching and waiting, she catalogued her survival tactics. Attacked from the front? Side step with a kick to the knee. Let their momentum work in her favor. Attacked from the rear? Head butt to the nose. Swarmed by a pack? Do whatever it took to break free and climb, even if it was into the back of a truck or up a tree. She’d mastered chokes, arm bars, and more than one submission hold.

Humans infected with 212R were lethally fast. Speed and maneuverability were key in her personal survival strategy. And she must survive. Levi needed her.

Wary, Callie perched on the seat in her little boat and let loose a high, piercing whistle. No movement.

Her slingshot zipped securely in her pocket and a pack on her back, Callie ran. The port was clear, and she hurried past the ticket office, the souvenir shop, and a tiny cafe. Her liberated Range Rover sat with the keys in the glove box. It started right up, and Callie chose a CD from her growing collection of pilfered music. It felt like an Elvis Presley sort of day. She pushed in “Blue Suede Shoes” and drove fast down Temple Street.

Roman Duran jogged a step behind Jackson Schultz and saw the moment the other man faltered on his wounded leg, careening into a chain link fence. Without missing a step, Roman ducked under Jackson’s arm and forced him forward along the garbage-strewn sidewalk. The pack of infecteds was only two or, at the most, three blocks behind.

“Here,” Pollard Datsik, the third member of their trio, called. He slipped around a block wall and sprinted up a set of exterior stairs to an apartment above a liquor store. Roman dragged Jackson behind him.

While Roman helped Jackson to a sagging sofa, Pollard shut the door with a quiet click and peered through the window, his breath a puff in the silence.

“Are they following?” Roman whispered. “Are they swarming the stairs?”

Pollard stretched his neck to see further, and then soft-stepped to the next window and stared at the street below.

Roman didn’t buy it. The injury in question was a jagged slash above Jackson’s knee he’d earned climbing a fence the night before. Though they’d stopped running long enough to wrap it, Jackson wasn’t as energetic as he’d been before the wound.

Separating from Jackson, Roman peered through a broken windowpane, blinking away the exhaustion that had dogged him for the past couple of days. Without enjoyment, he chewed one of their last handfuls of goldfish crackers, the food dry and pasty in his mouth. Water was about to become a serious issue.

“I’m so thirsty,” he complained in a whisper. “And dirty.” What he wouldn’t do for a clean, clear stream of fresh water.

Roman glanced at his companions, noting their equally stained and stinking uniforms. Maybe volunteering to leave Washington, DC had been a crappy decision all around. Maybe the veep should have sent older, more experienced survivors on her search and rescue mission. Maybe his eighteen years on the earth weren’t enough for this kind of assignment.

A pack of infecteds had caught their scent in Raleigh and hadn’t let go. Forty-eight hours without sleep or rest. Two days of running, of hiding, of trying to lose the predators. And now, they were out of food and water.

“What if we climb on the roof?” Roman whispered. “We could wait them out.”

Pollard seized the bag of crackers from him and crammed a handful into his mouth.

“We’re out of water,” Jackson reminded them. “What if they trap us for days? No.” He shook his head at the room’s closed door. “We could end up a lot worse than we are now. I say we keep running.”

“Forever?” Pollard scoffed. “There has to be a point where we say we can’t continue like this. A point where we circle around the pack and head home.”

Roman wouldn’t call Washington, DC home. But then he’d never called anywhere home. An orphan kicked into the system after his mother abandoned him, none of the dozen foster and group homes he’d lived in had ever been his home. And DC was no different. It was a way station to somewhere else, no matter whether he had an apartment or a job or a purpose. It still wasn’t home.

Roman had yet to find his real home.

Swallowing dry crackers, Roman double-checked the number of rounds for his M-16. When they’d left the safety of DC’s walls, they each carried forty rounds for their personal firearms. It had sounded like a lot at the time, but he was down to nineteen rounds. The other two men had less.

For an entire day, Jackson had fired warning shots at their pursuers—a mistake, Roman realized now—but the only result had been bringing even more infecteds into the pack, as nearby stragglers were attracted by the noise.

His ears perking up, Roman rushed to the far window and scanned for movement. Was he crazy, or did he hear a car engine?

Roman had left DC wanting to help people, both infecteds and survivors. After running into people, one worse than the last, his companions were nearly to the point of abandoning the mission. But Roman hadn’t given up. Even though they hadn’t helped a single person.

The sound of the Range Rover’s engine quieted as it drove out of sight.

“Let’s try the distraction method again,” Roman suggested. The last time they’d thrown empty cans near the zombies, they’d been curious enough for Roman and the other two men to escape. “It worked before.”

Their rescue mission to Myrtle Beach could still be salvaged once they shook this pack. Unhindered by the starving horde of infecteds, the three men could scavenge for food and water, sleep safely in shifts, and cover ground at an easy pace. This running for their lives, though, couldn’t go on forever. Without water and more substantial food than goldfish crackers, he wasn’t going to survive much longer.

“I’ll open fire,” Pollard said, as if Roman hadn’t spoken, “and you two run for the cell tower at the end of the street. I’ll meet you there.”

“Good plan,” Jackson said, “except you’re a horrible shot. I’ll do the shooting, thanks.” He stood, trying to hide a wince of pain but failing.

Pollard clenched his jaw at the insult. “Fine.” He grabbed Roman by the sleeve and dragged him toward the door.

“You sure about this?” Roman asked, still thinking his idea would work better than wasting more bullets and hoping to find each other under a tower.