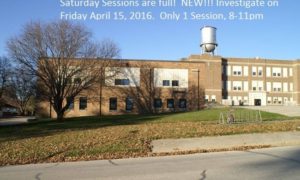 In March 2014, the IKM-Manning School District made the tough decision to close the Manilla middle school, which had been a staple in that community since 1915. For the past two years, the building has been for sale and sitting empty—or has it?  A non-profit organization, Ventures Paranormal Investigations of Manilla, says there may be something otherworldly residing in the Manilla building, and they will be conducting their own investigation into reported activity on Friday, April 15. Ventures Paranormal has reported visitors have been able to capture doors closing on request, shadowy figures and humming on the second floor. Previous investigations have picked up and recorded electronic voice phenomena (EVPs) and electromagnetic fields with the K2 meter along with noises and other unexplained phenomena. The one session scheduled for 8 to 11 p.m. that evening was opened up to the public for a cost of $25 a person and has already sold out. Attendees will be allowed to bring their own equipment, including cameras, video and tape recorders and any other paranormal investigative equipment they would like. They are also allowed to use equipment provided by Ventures Paranormal. And for one night at least, whatever walks the halls at the Manilla school will not walk alone.