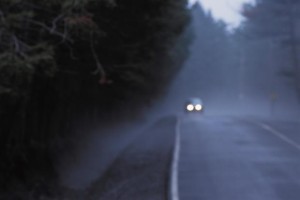 A group of paranormal investigators have received three reports this month from motorists claiming to have seen a ghost running across a well used county road.

The A4076 that connects Milford Haven to Haverfordwest has been a hive of strange encounters.

The first report of strange activity came from two ladies who were travelling towards Haverfordwest on February 5 at approximately 7.30pm.

The driver said they were heading towards Dredgemans Hill when a dark shadow ran in front of the car.

The lady described the figure as a shadowy, human shape with long arms and legs. She said that it was so sudden that she slammed on the brakes.

Four days later, another two ladies travelling to work had a similar experience in Steynton just after 6am.

Also wanting to remain anonymous due to their profession, they claimed to have seen a tall shadowy figure on the side of the road just after the traffic lights.

As they continued their journey the tall figure darted across the road at an astonishing speed and then disappeared.

Luke Mayhew was driving through Steynton on the evening of Wednesday, February 11 when he had his own experience. He said: “I’m 100% certain I saw what I believe was a ghost/apparition while driving home.

“I saw it run right in front of me from one side of the road to another. I had to slam on my brakes.

“Of all the years I have lived in Milford I have never seen anything until last night. It was as clear as day!”

Gavin Davies from the Paranormal Chronicles said: “The road has witnessed some terrible and tragic accidents over the years. Local drivers are witnessing chilling and disturbing hauntings replayed in the darkness.

“Perhaps it is merely reflections of light or a hoax played out by a daring and suicidal prankster.”