Written by Luke Morgan Britton in May 2017 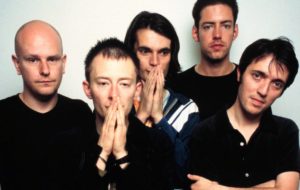 Radiohead have recalled working on their classic album ‘OK Computer’ in a haunted house, speaking in a new interview to mark the 20th anniversary of their seminal record.

The band recently announced the 20th anniversary reissue of their classic album ‘OK Computer’. Originally released in 1997, ‘OK Computer’ was largely recorded at St Catherine’s Court in Bath between 1996 and early 1997.

Speaking of the Somerset manor house where the likes of The Cure and New Order have also recorded, guitarist Jonny Greenwood has told Rolling Stone that “people were always hearing sounds” in the house.

Frontman Thom Yorke added: “Ghosts would talk to me while I was asleep. There was one point where I got up in the morning after a night of hearing voices and decided I had to cut my hair.” The singer described how he proceeded to attempt to cut his hair with “the little scissors on a penknife” and “cut myself a few times. It got messy. I came downstairs and everyone was like, ‘Uh, are you all right?’ I was like, ‘What’s wrong?’ Phil very gently took me downstairs and shaved it all off.”

Elaborating on his psyche during the making of ‘OK Computer’, Yorke said: “I was basically catatonic. The claustrophobia – just having no sense of reality at all… I was getting into the sense of information overload, which is ironic, really, since it’s so much worse now.”

“The paranoia I felt at the time was much more related to how people related to each other,” he added. “But I was using the terminology of technology to express it. Everything I was writing was actually a way of trying to reconnect with other human beings when you’re always in transit. That’s what I had to write about because that’s what was going on, which in itself instilled a kind of loneliness and disconnection.”

“Back then,” Yorke recalled, “the person I saw in the mirror kept saying, ‘You’re shit. Everything you do is shit. Don’t do that. It’s shit.’ ”