Does Jared Leto Live in a Haunted House? 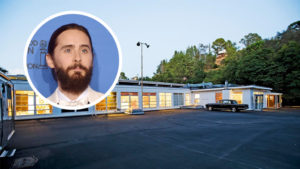 The ‘Suicide Squad’ actor lives in a converted Air Force base in the Hollywood Hills and believes the estate is inhabited by ghosts.

He told the latest issue of ES magazine: “God knows what they did here, but it talks. We’ve already had ghost sightings reported by my housekeeper. A handyman quit the project as he had an encounter. But I feel quite at home up here. It’s like a refuge. You’re at the top of this mountain. There’s this breeze coming through. It’s hard to leave.”

And Jared, 45, also revealed he believes in Singularity, the theory that technological advances will lead to machines that are smarter than human beings and that man and technology will eventually merge.

He said: “It’s far away but I don’t think it’s science fiction. I think it’s reality. Haven’t you had that thing, where you dream something and it sort of … happens? It’s inevitable that will happen at some point. You’d have to be a monkey not to see that. The difference between ourselves and our technology will be hard to decipher and determine.

“I mean, this is a long time in the future, but we are going to become an interplanetary species. Culture and society will advance. And we will become indistinguishable from the technology that gets us there. If you refuse, you are going to be left behind in the Dark Ages. You won’t even be able to talk to people, you’ll be grunting compared to the language that they speak.”