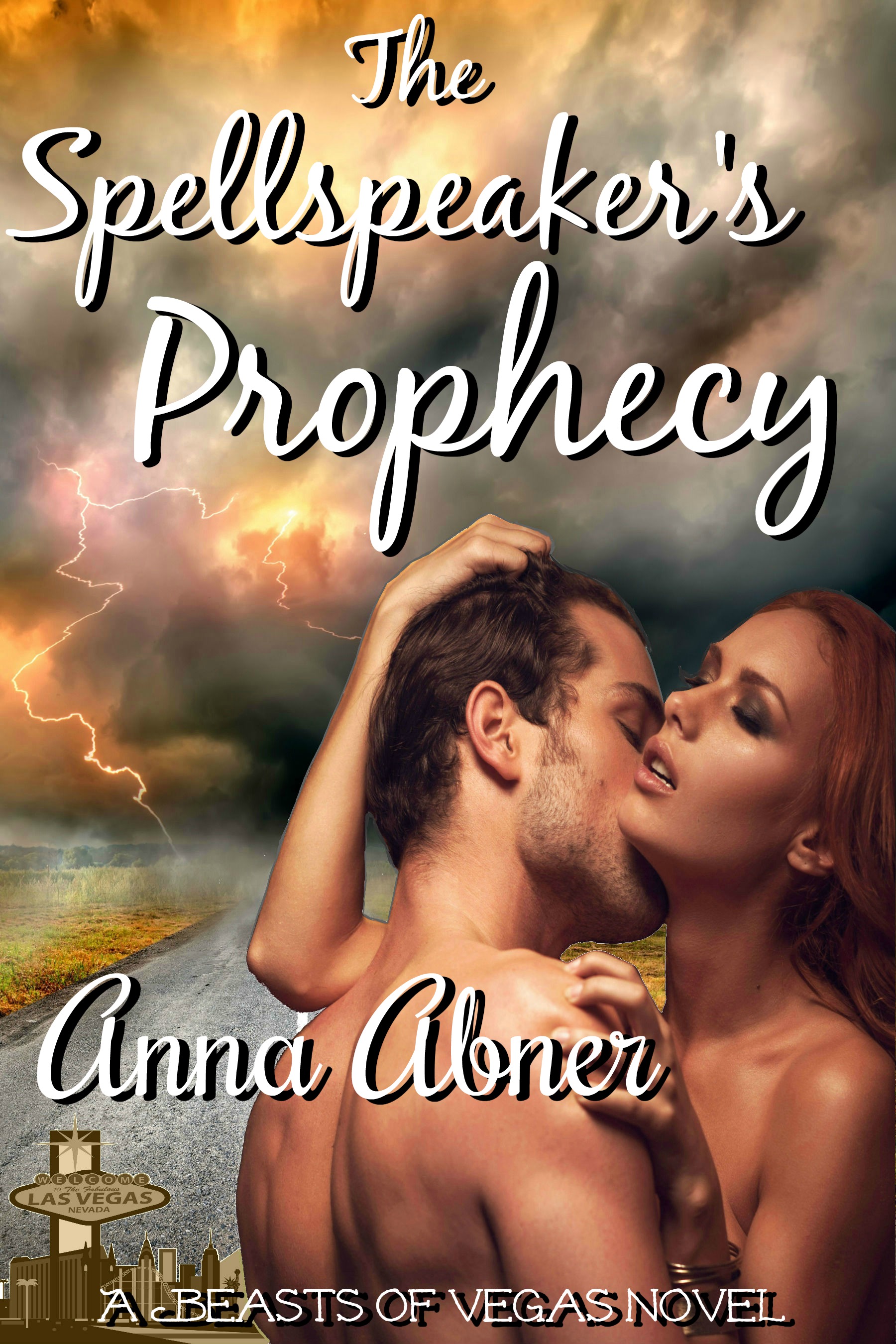 Read the first chapter in the second installment of the Beasts of Vegas series.

Roz Carrera is a witch on the fritz. Thanks to the Coven’s rejection of her application for membership, she’s been denied a proper magical education. Without a mentor, she’s nearly useless in helping her team of vampire hunters. Complicating matters is the hulking shapeshifter she stumbles upon outside Las Vegas who may or may not be a vicious psychopath.

The only creatures shapeshifter Lukas Larsson hates more than vampires are witches. He’s in the Nevada desert to destroy the vampires who murdered his family, but the witch Roz Carrera and her ragtag team sideline him. He can’t allow the very sexy Roz to distract him from his vengeance.

Roz Carrera calculated the chances that the bonfire in the distance was a positive occurrence. Considering the number of vampires in the area, the lateness of the hour, and the sheer size of the flames, the odds weren’t great it was anything other than a clusterfuck.

Connor Beckett leaned forward in the passenger seat. “Trouble ahead,” he said softly, his voice nearly fading under the roar of their modified F-350’s engine. “Ease up, Roz.”

She decelerated slowly. In the darkness, the orange and red flames shone like napalm. Shapes and shadowy figures danced around the fire. When she cranked down her window, an animal—a big one—roared in some cross between rage and pain.

“Vampires?” she questioned, catching Connor’s eye across the bouncy truck seat while his girlfriend Ali Rusenko fidgeted between them.

“I can only hope.” He gave Roz a look that said—keep your guard up. It had been days since they’d even seen an infected. Too long, considering their mission’s sole objective was to find and capture them.

Signs of modern civilization were sparse this far out in rural Nevada. It was the only light for miles. The only village for miles. Nothing but acres and acres of desert, rocky hills, and sagebrush. And anybody who lived anywhere within sight appeared to be circling the bonfire.

“Let’s move real slow on this one,” Connor said. Once she parked the truck a hundred feet from the fire, Connor cracked open his door. “Roz, keep everyone calm until we figure out what’s going on.” He shoved a .44 down the waistband of his jeans and handed a smaller .38 Ruger to Ali. “If anyone breaks away and comes at you—shoot. Don’t hesitate.”

“I’m not shooting anyone.” Ali didn’t even glance at the weapon.

“Just in case.” He forced it into her hands.

Rolling her eyes at the dramatic twosome, Roz stepped out of the truck in form-hugging leggings, flip flops, and a crop top. Connor tossed her a handgun over the hood and she caught it, checked the clip, and flipped the safety off. She rolled her shoulders. Ready.

They approached the fire together.

To the east of the fire, a full-grown bear writhed on a set of chains, strung between two mobile homes. Roz wasn’t great with species—black, brown, polar, grizzly—but she recognized a bear when she saw one.

Roz would rather have skedaddled, but Ali moved forward. And where Ali went, Connor followed.

And just so Connor didn’t think he was too special, barking orders, Roz said, “Connor, flex your muscles. If one of those freaks makes a run for it I expect you to throw a car at him.”

Except Roz was a witch on the fritz and had been for weeks. The thought of calling her power already had her pulse picking up and her blood pressure spiking. She was so tired of failing, and yet she couldn’t figure out how to succeed.

“I don’t want to leave the bear here to be tortured and killed.” Ali laid a hand on Connor’s sleeve. Though Roz couldn’t see her, she figured the girl was giving Connor her big, sparkly blue eyes. Fucking bleeding hearts. What were they gonna do with a super pissed off bear? They lived in a hotel for crying out loud.

“This isn’t our business,” Roz reminded them both. “I vote for backing out of here. We’re supposed to be hunting vampires, remember? This is local stuff.”

“We can’t leave it here to be tortured,” Ali hissed. “You know what they’ll do to it.”

“It’s none of our business,” he hissed back. “Vampires, remember? Not bears.”

“We could put it in the back of the truck,” Ali continued, still staring with moon eyes at Connor. “We’ll set it free in the mountains. It’s the right thing to do.”

Normally, Roz would be in step with Connor, but she wanted to piss him off. She was still stinging from being replaced as the sole female in their group. Oh, how easily she’d been replaced.

Roz sort of hated them right now, their love and their to-the-death loyalty and the happiness in their eyes, and their secret glances, and the passion sparking between them. Because it had been a long time since anyone had looked at her that way.

If Connor wanted to leave, then suddenly Roz felt like staying. “Not that you asked,” she said, shouldering her way between them. “But I say we rescue the bear.”

Connor sighed as if this was a huge imposition, but Roz saw the sparkle in his eyes. He loved the hunt, whatever the prey. He was itching for a fight. They all were. The last vampire they’d encountered had fought so hard against being captured, they’d killed it by accident. Strange. Cause back in the day they’d have killed it on purpose. But since Ali arrived and changed everything, now they had a no killing policy when it came to the infected.

“But let’s do this quick,” Connor said. “No blood shed. Especially ours.”

A small group of fire enthusiasts broke away from the group and ambled nearer.

Roz took a deep, calming breath and centered her thoughts. “Blessed is my power,” she whispered, breathing in through her nose. “I call upon thee.”

Nothing sparked. No invisible wind, no whirling particles, no zing under her skin.

A barrel-chested older man raised a can of beer and burped hello. “You all tourists?” he asked in the same tone she’d ask a person, You all child molesters?

Connor may have been impersonating a Roman statue, but Roz knew inside he was a jumpy mess. He was calculating. Using his senses. Running plays. Only rarely did anyone get the upper hand on her best friend. He was a freaking warrior.

“Not exactly,” Roz answered. “What’s with the animal?”

“Last night, three people were torn apart in their trailer.” He slurped beer, and then shrugged. “We put out bear traps, and lookie what stepped in one. Must’a escaped from the zoo.”

Under her breath, Roz called her power again. A whisper of magic tickled the tips of her fingers. There was something there in reserves, and she teased it out.

“What are you going to do with it?” Ali asked the man.

“Can’t you see the BBQ we set up?” He guffawed as the bonfire flared over his shoulder.

Right on cue, the animal in question roared an inhuman scream of pure rage with an underlying note of pain. Roz may play the tough girl on a regular basis, but that sound plucked a heartstring. They were going to do horrible things to the beast because it had chosen the wrong food source.

“Join us,” the man said. “There’s plenty for everyone.”

Roz couldn’t imagine how these drunk idiots had wrapped a chain tight around the bear’s throat and trapped it between two mobile homes, but she guessed the steel bear trap eating its left hind leg had something to do with it. Another heartstring twanged.

The beast’s hide shone with blood. Its leg was torn up and broken, and patches of fur were missing.

Connor gathered both women into a huddle a few feet away. “Roz, when I signal you, put the bear to sleep. And, Ali, for God’s sake, keep your hand on your weapon.”

They turned back toward the mob circling the fire. “We can take care of your bear problem,” Connor said. “We’ll buy it off you and haul it away.”

This announcement was met with general irritation from the crowd.

Roz pushed her power up and out. “Stay calm,” she hissed, over and over, a never-ending stream of words. So long as she kept speaking, her spell would hold. Perspiration beaded between her breasts and under her arms.

She whispered under her breath, her lips barely parting at all. Knowing in a few minutes, she’d have to throw up a sleeping spell on the bear on top of the calming spell she was currently sweating through. Not that Connor ever considered her power’s parameters. Connor thought it was a piece of cake speaking complex emotional spells, making people do things they didn’t want to do. She wasn’t a machine, goddamn it. She was barely a witch at all, let alone a first class spellspeaker with the ability to alter the world.

“You have enough to do, burying your dead. Let us pay you for the bear.” Under his breath, Connor said, “Roz, get out the money. Hundreds should do it. And put the bear to sleep.”

Sure, sure. Keep the crowd calm, force an enraged animal to close its little peepers, convince a grown man scraps of paper were hundred dollar bills, and anything else that came to mind. No problem.

Her fingers and lips tingled with the power swimming through her.

“Calm, calm, stay calm, go to sleep.” She repeated the spell, her lips working in fast-forward. Her breath hissed between her teeth, the words all running together. Without stuttering a syllable, she pulled three hundred dollars from her pocket. Connor didn’t need to know it was real cash, not magicked money. There was only so much she could do.

Roz hated passing off newspaper as bills, when she could actually juice up her magic to perform the spell. Those were the places she could never go back to. She was giving witches a bad reputation. Not that she cared what the Coven thought of her. Those prissy, holier-than-thou bitches could all roast.

Especially after their latest bullshit. Last week, an envelope had arrived at their suite at the Le Sort Hotel addressed to #Roslyn Carrera. Inside was a cease-and-desist letter from the Coven demanding she stop performing unauthorized magic.

In the distance, the bear quieted. Roz pushed harder, speaking faster, focusing all her energy on the sleep spell. The beast roared once and sat down, its head, shoulders and chest hanging from the chains. If they weren’t careful, the thing would choke to death before they rescued it. She refocused on the trailer park crowd.

Roz’s head snapped up. What? Which spell had faded? Who were they coming after first?

“No way,” she breathed, her spells forgotten.

The bear wasn’t a bear at all. He was a shifter. A supernatural freak, just like her. And asleep, his conscious mind gave up control and he shifted back to his natural form.

The bear was gone, vanished, and in its place, still strung up between two rusted mobile homes with chains, was a man. A bleeding, unconscious, naked man.