Or, Welcome Back The Author Of The 13th Floor

Living in a haunted apartment building

On a floor that doesn’t exist.

A retired demon acquires a price on his head.

A werewolf is hunted by her pack.

A harpy challenges Zeus for the soul of the man she loves.

A vampire is obsessed with a young woman he can’t find.

A banshee falls in love with someone who’s death she has seen in a vision.

And a sweet ghost must battle a primal monster to save them all.

Welcome back, Christine! I’ve finished your 13th Floor series, and I loved it. I’m so glad you’ve returned to tell us about the 13th Floor collection, now available for download.

Anna Abner: When you started writing The Marquis did you know you were starting a series?

Christine Rains: Yes. I knew even before I started to write that I wanted to do a series of novellas. I wanted to showcase my writing and give everyone a sense of the kind of writer I am.

AA: Did you have a detailed game plan from the beginning for each story or did ideas develop over time?

CR: I’m a pantser. I’d love to say I plotted it all out, but I had no idea how each story would develop or even how they were going to link to one another until I wrote them. I started with a story concept or a character idea and went from there.

AA: Luck plays a part in The Dragonslayer when Xan believes he failed in a task after accepting a cursed token. In your own life do you believe in luck?

CR: I do believe in luck. Being in the right place at the right time can make all the difference. Yet I also believe that through hard work and perseverance, you can reach places luck can’t take you. I don’t believe in lucky or unlucky items, though. That’s all in the heads of those that believe them.

AA: The Harbringer was my favorite story in the series. Was it fun to write a heroic journey set in Olympus?

CR: It was so much fun to write The Harbinger. I wanted to keep a lot of the classic mythology about heroes and gods, but I wanted to modernize them at the same time. Bits like gods using iPhones or using the coliseum as a skate park made me giggle.

AA: How much research did you have to do for The Harbringer?

CR: I’ve always loved Greek myths, and so I already had in mind the gods and myths I wanted to play with in my story. I researched all the gods, looking for not so popular tidbits and stories on their relationships. I needed to know how they interacted with each other to create a realistic divine soap opera.

AA: Well, great job! That story was a kick to read. Speaking of gods and goddesses, in the series you wrote dozens of characters including demons, harpies, witches, banshees, vampires, and werewolves. Did you have a favorite supernatural character to write?

CR: It’s hard to choose just one. The banshee and harpy were new types of characters for me. I like to experiment with different ones, but the ones I write the most about are demons. They have a wide range of powers and looks. There are so many myths to play upon, and I thoroughly enjoy making up my own rules for demons in a world.

AA: I loved the mix of modern movie monsters with beings like banshees, harpies and Greek gods. What made you decide to incorporate so many different supernatural creatures into your series?

CR: I wanted a rich urban fantasy world which brought every legend and fairy tale alive. I like the idea that there’s truth behind every myth. I also enjoy stories that have a variety of supernatural beings. We get not only human fears and prejudices, but those amongst the various creatures in the world.

AA: I know you use beta readers in your writing process. Can you give us a quick definition of a beta reader and how they help you improve your stories?

CR: A beta reader reads through the manuscript looking at plot, character, setting, and background as well as the overall story. They don’t need to go into as much detail as critique partners, nor do they need to worry about editing. (Even though there are beta readers like mine who are generous enough to do so!) It’s helpful to have at least one beta reader who reads and/or writes in your genre. My beta readers are awesome. They’re very different in the way they critique. Each focuses on things that the others miss, and I receive an excellent all-around critique from them.

CR: Stephen King, Richelle Mead, and Karen Marie Moning are three of my favorite authors. Recently, I’ve been reading a dark fantasy series by Joseph Delaney called The Last Apprentice. They start off as MG, but they grow with the protagonist. The series is incredibly original, and Delaney has done some excellent world building.

AA: Can you tell us about any upcoming projects?

CR: I’d like to write more short stories and sharpen my writing skills. I’m still not sure which project I’m going to tackle next. I want to take one of my older manuscripts and revise it so I can query it. I have at least three I’m trying to decide between.

AA: Good luck with all your endeavors. I look forward to reading more from you in the future.

CR: Thank you so much for having me here today, Anna. 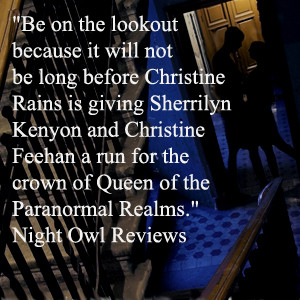 Connect with Christine Rains at