Because I haven’t seen enough Katniss & Peeta lately, and I miss them. Enjoy!

Or, Someone In North Carolina Has A Sense Of Humor 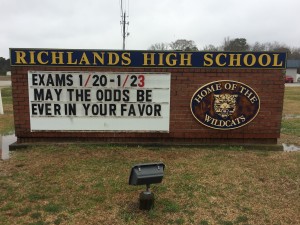 Sorry, staff of Richlands High School, but the odds are never in our favor.

This video gave me chills. It’s so beautiful. And the text from the books elevates it to a whole new emotional level. Enjoy!

Or, The Time I Met The Mockingjay’s Screenwriter

I have been such a fan of Danny Strong’s since he played Jonathan on Buffy the Vampire Slayer. But knowing he’s guest starring on Girls and writing Mockingjay Parts 1 & 2 makes me adore him even more.

I don’t usually brag, but since I’ve already started I may as well get it all out now.

At the same convention I was lucky enough to get my picture taken with James Marsters (Spike on Buffy the Vampire Slayer).

This is me and Nora Roberts taken at a Romance Writers of America Conference. She ran out of books to sign so she sweetly offered to take photos with the next people waiting in line.

Do you have pics on your phone or maybe next to your desk taken with people you admire? Tell me about it!