Is The Horse You Came In On Saloon Haunted?

Written by Clint Lanier and Derek Hembree in 2017 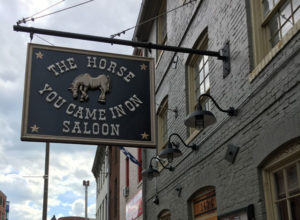 There’s no controversy about which bar in Baltimore, Maryland is the oldest – the honor belongs to The Horse You Came In On.

Founded as a saloon (under a different name) in 1795, this bar has been quenching the thirst of sailors, shipbuilders, and all other kinds of miscreants since its opening. When it was founded at what is now called Fells Point, the port of Baltimore was an important shipping center for the young United States. Cargo from throughout the world arrived and offloaded here, including African slaves during the height of the American slave trade.

Originally, the bar was quite small with stables in the rear to keep horses while customers imbibed. Its legacy, then, is as a saloon rather than a respectable tavern of the day (like Gadsby’s Tavern down in Alexandria, Virginia). This is fitting considering its proximity to the dock and the type of clientele it saw.

The current name of the joint draws from this legacy. Howard Gerber bought the place in 1972 and changed the name from Al and Ann’s to The Horse You Came In On. He then got a friend to dress up like a cowboy and ride a horse into the bar on opening day. That pretty much sums up what this place is like – funny and fun with an odd sense of humor, but always keeping an eye to the past.

When you walk inside, the first thing you notice is just how damned big the place is. Years ago the owners expanded the bar by replacing the area in the back that housed the stables with three brand new bars, including a tequila bar and a bar with more of a Tex-Mex sort of feel.

The small bar at the front entrance is the authentic 18th century saloon. The furniture and décor are new, but as Rob Napier, the long-serving manager and bartender told us, after 200 years of service things will get updated. He pointed out the tin ceiling, which was probably added in the 1800s, and the electric lines added in the 1900s. Things change. 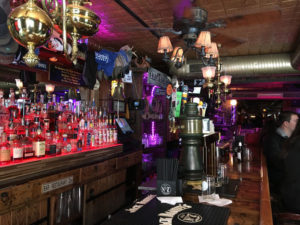 But not necessarily everything. We think the atmosphere is probably about like it was back when it was founded. It’s energetic but comfortable, bawdy but thoroughly enjoyable. The live music, played 7 days a week, can get a bit loud, but not so much that you can’t have a conversation across the table. It’s easy to see yourself here back in 1849, having a drink at the bar with your friends. And if you had been there then you might have noticed a local, down and out writer having a drink before walking out into the night.

That writer would have been none other than Edgar Allen Poe. You see, this bar was the last bar he would have passed on the way to his house, and so he was known to frequent the place. It’s thought, in fact, that this was the last place he drank before being found on the night of October 3, 1849, deliriously wandering the streets of Baltimore. He died four days later.

It’s Poe, in fact, that Rob tells us is the ghost that causes so much havoc at The Horse. They typically refer to him as “Edgar,” and even Rob, who says he was never really a believer in the supernatural, has had his run in with the spirit. He told us that late one night, as he was closing up with another bartender, they went to lock the front door when suddenly, a beer mug sitting on top of the bar shattered into a pile of broken glass for no reason at all. Rob turned to see a look of terror on his bartender’s face and so asked him what was wrong. The bartender took out his phone and showed Rob a picture he took the night before. It was of a shattered beer mug that exploded in the exact same place on the bar just as he was closing up. Needless to say, Rob is now a believer.

The Horse has a full bar and can whip up just about anything you can order, but they are known for their Jack Daniels and tequila programs. They infuse their own cinnamon, honey and green apple Jack Daniels. They also have a Jack Daniels bottle program where you can buy a whole bottle, leave it there, and then drink off it until empty. They also infuse tequilas and have a huge selection of the smoky, agave-based spirit at their tequila bar.

Lastly, they do have a full kitchen and a great selection of pub grub. We tried the crab and cheese soft pretzel and the street tacos, and we’d definitely recommend either one.

If you visit Baltimore, don’t miss the historic Fells Point, with its 19th century cobblestone streets and historic buildings. And, of all the places to visit, make it a point to have a drink at The Horse You Came In On. Order an Old Fashioned or local beer, raise a toast to Edgar Allen Poe, and drink in some history!