Family Searching for Nanny in Their Haunted House

Nanny Sought for Haunted House in the Scottish Borders 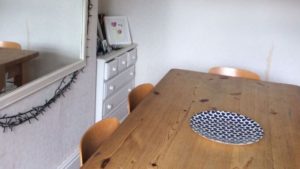 Five nannies in the past year have blamed their departure on spooky happenings in the “haunted” house.

The alleged incidents have included strange noises and moving furniture.

The family have not experienced any “supernatural happenings” themselves but are happy to pay above the asking rate to find the right person.

The couple, who have two children aged five and seven, are advertising the position on Childcare.co.uk, a social networking platform for parents, childcare providers and private tutors.

The successful candidate will have their own room with en-suite bathroom and private kitchen in the family home, a “lovely, spacious, historic property in a remote spot with spectacular views”.

However, the live-in nanny will sometimes be alone in sole charge for up to four nights per week while the parents work away.

The advert said: “We have lived in our home for nearly 10 years.

“We were told it was ‘haunted’ when we bought it, but kept our minds open and decided to buy the house regardless.

“Five nannies have left the role in the last year, each citing supernatural incidents as the reason, including strange noises, broken glass and furniture moving.”

It said that had resulted in a “period of great upheaval” for the children.

“We haven’t personally experienced any supernatural happenings, as they have been reported only while we’ve been out of the house, but we’re happy to pay above the asking rate, and feel it’s important to be as up-front as possible to find the right person,” the advert continued.

“We are keen to find the perfect long-term nanny, so if you’d like to be considered for this rewarding and exciting position, please do get in touch with us.”

They are offering a salary of £50,000 gross per year and 28 days holiday, plus bank holidays.

Richard Conway, founder of Childcare.co.uk, told the Daily Mirror: “When we saw the advert we were stunned.

“Some of the guys at HQ were sceptical but after talking to the family and their previous employees we realised it was a genuine position.

“We have hundreds of thousands of providers on the site and we’re hoping that one of them will be able to help them.

“We’ve had some weird and wonderful families find childcare providers through the site, however I think this is probably the most interesting story we’ve heard.

“The family has assured us that no harm has come to anyone living in the house, however the nanny will have to have a strong disposition!”