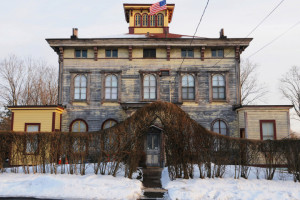 Or, Discover The Origins Of Disneyland’s Haunted Mansion Ride

Written by Sara Hofstein in Dec. 2014

In Savannah, Georgia, the dead are just as important as the living. Graveyards and majestic homes named after their prominent former owners are found all over Savannah’s downtown area. If you’re downtown, it’s likely that you’re walking on a dead body. Many a graveyard was paved over to make way for wider roads and the grand homes that were built in the 19th century. With its Spanish moss-covered trees, Savannah is said to be one of the most haunted cities in America.  It was no wonder, then, when I heard that the Hamilton-Turner House, now an inn that was built in 1873, was one of the models for Disneyland’s Haunted Mansion.

The Hamilton-Turner Inn is a beautiful Second Empire-style home built on Lafayette Square and was the first home in Savannah to have electricity. The original owner was the president of the local electric company, and it is said that a crowd gathered outside the home to watch the lights turn on, thinking that the home would explode.  It is also one of many Savannah homes rumored to have a resident ghost.  The story that is heard most often is of a Confederate soldier who roams the halls. The only explanation given for why a Confederate soldier haunts a home built after the Civil War is that the house was built on top of his grave.

Its Second Empire architecture is naturally given to creepiness and made the HM rumor unsurprising. The Addams Family home, the Munsters’, and the Bates home in Psycho are all Second Empire.  I wanted to look into this connection further between the Hamilton-Turner House and the Haunted Mansion.

I did not believe that the current version of the HM was based on the Hamilton-Turner House, as the HM looks more akin to a Louisiana plantation style, even though we know the home is based on the Shipley-Lydecker House in Baltimore.  I turned, instead, to the pre-Ken Anderson drawings to the designs of Harper Goff in the 1950’s.

The coincidences between the two homes began to build. The current Haunted Mansion at DL is on New Orleans Square, while the Hamilton-Turner House is on Lafayette, named after the French nobleman the Marquis de Lafayette. Both homes, then, are located on French-influenced squares.  The original design and the Hamilton-Turner House are located next to churches and in cities with a long connection to the dead.

I reached out to the Hamilton-Turner Inn to get their take on the tale.  Suzy Ridder, the inn’s General Manager, said that she has heard the rumor before but she doesn’t know whether it’s true.  She said she could see the similarities between the Haunted Mansion and the Hamilton-Turner House, but the one thing that was actually similar is the fountain outside each of the homes.

I looked into the matter further, to see if I could find more associations.  I found a few dubious sources, such as an Examiner.com article that said the name of the Haunted Mansion home was the Hamilton, and aCNN iReport that said Walt himself sat on a bench in front of the Hamilton-Turner and sketched it. Denise Hildreth’s novel, Savannah From Savannah mentions the story in its pages.

The rumor can be found at the website for the Association of Historic Inns of Savannah, where it says that it was “informally the model for the ‘Haunted Mansion’ at Walt Disney World in Orlando, Florida.”  I figured the website meant Disneyland and not Walt Disney World as non-Disney fanatics often don’t realize that there are differences between the two resorts. They think the rides look the same on both coasts (I wonder how many people know that even the castles are different?).

I reached out to people in Savannah, contacting the three most popular tour companies in order to find out what they knew. Garry Patrick, Program Manager of Ghosts and Gravestones, a subsidiary of the Old Town Trolley tour company, said that he had heard of the rumor but that the house was not a part of their tour program.

Adam Wilkins of Oglethorpe Tours had also heard the story, but he believed it would “make sense that this inn was used as [Walt’s] inspiration.”  He went on further to say that “Walt Disney did, briefly, consider Hutchinson Island [an island off of Savannah’s coast] as a location for Disney World,” but that it wasn’t large enough to accommodate his vision.

The last tour operator to whom I reached out was the Old Savannah Tour Company, which propagates this rumor according to a chat I found on DoomBuggies.com (among other sources stating that tour guides continue to give this info), but my inquiry went unanswered.

I contacted Jeff Baham of DoomBuggies.com to ask him further questions about the Haunted Mansion and the possible connection with the Hamilton-Turner House.  He did not have a definitive answer for Harper Goff’s inspiration, though he imagined that Mr. Goff would have looked at many places and sketched his designs based on something real. In regards to the Hamilton-Turner House, however, all rumors he has heard are false.

Convinced by a Haunted Mansion expert that the story, as fun as it was, was fabricated, I went back to search for the source. The only real connection I found was in the official tour guide handbook published by the city of Savannah. Parts of The Haunted Mansion film were shot in Savannah (though not at the inn), but I knew the rumor was older than 2003. Beyond that, the only mention of the Hamilton-Turner House within the guide was that it was the first in town to have electricity. The similarities between the two haunted homes began to unravel.

The long-established name of the Haunted Mansion home, though not necessarily considered canon, is the Gracey Mansion, not the Hamilton, thus debunking the Examiner.com article.  On the same message board where I found the Old Savannah Tour Company tip, I found a name for a person who might have begun the rumor, a woman named Nancy Hillis. This tale suddenly began to make sense. Like all good Savannah stories, the Haunted Mansion rumor begins with “the Book.”

There is only one book in Savannah known simply as the Book, and surprisingly it’s not the Bible. It’s John Berendt’s Midnight in the Garden of Good and Evil, a tell-all of Savannah in the 1980’s that Clint Eastwood turned into a film starring John Cusack and Kevin Spacey in 1997. If you live in Savannah for any amount of time, you will somehow become linked to the Book without even trying. I moved to Savannah in 2003 and left when I went off to college in 2007. In those four short years, I learned that one of my favorite diners was a common meeting place in the Book; a story is recounted in the pages of when the protagonist, Jim Williams, had a run-in with my synagogue when he placed Nazi flags on his house, which is right across the square from my temple (though he only placed the flags in order to stop a film crew from shooting a made-for-TV movie about Lincoln’s assassination in front of his home).  I went to high school with the grandson of Jim Williams’ archenemy and neighbor, and my school was also mentioned in the Book. I moved to Savannah 20 years after the novel’s events, and somehow my life can be found in its pages.

John Berendt changed Nancy Hillis’ name to Mandy, and the character became John Cusack’s love interest in the film. In reality (and in the novel), she was the girlfriend of Joe Odom, a man who knew how to have a good time and who threw the most raucous parties. Hillis owned the Hamilton-Turner House in the 1990’s.

I was once told by an employee at the Andrew Low House, another stately mansion located on the same square as the Hamilton-Turner House (and where I worked for one summer), that there is no need to tell false stories in Savannah as all the best ones are true, but passing off tales as the truth seems to be a Savannah pastime. Nancy Hillis was no exception. She falsely claimed many times that she was once Miss Tennessee, and was successfully sued for it, and it seems that she was the one who began the Haunted Mansion rumor in order to drum up business for her failed venture.

I asked a Manager of the Hamilton-Turner Inn if she knew if the Haunted Mansion tale had originated with Nancy Hillis, and she said that she had never heard of that.  When pressed for more information about Ms. Hillis, the Manager reiterated the Miss Tennessee story that I had found in prior research, implying that Ms. Hillis was prone to making up stories.

With just a little digging, the truth behind the Haunted Mansion tale was not too hard to find. The story, in some way, originated with Nancy Hillis and quickly became Savannah legend.  Ironically, the Savannah Morning News says the reason the victim was murdered in the Hamilton-Turner House’s Haunted Mansionplay was because “he made up stories about the city.”

Do you like a good ghost story? Then you’d probably love Savannah! Although it’s highly unlikely that the city inspired Disney’s Haunted Mansion, you’d be hard pressed to find a town which evokes the beautiful eeriness of the Haunted Mansion better than Savannah, GA.