Haunted House 666 Years in the Making

Or, Take A Peek Inside Ireland’s Most Haunted House

Click here to visit the original article or keep reading to see the full story.

666 Years in the Making; Is This Ireland’s Most Haunted House?

The spectre-seekers found “major temperature drops” as well as “significant spikes” in electro-magnetic fields (EMF) in some areas of the house, they say.

“Our team is scientific, we don’t work with psychics or mediums,” Tina Barcoe, Location Manager and Lead Investigator with IGH, told Independent Travel.

“We go in with our equipment and try to debunk everything before we say it is paranormal. But there were things that happened at Loftus that we just couldn’t debunk.”

Those things included mysterious footsteps, readings indicating “an energy source” close by, and responses on a K2 meter (EMF) “which seemed to be in connection to our questions,” Barcoe says.

“Our investigation left us with more questions than answers.”

Of course you might say that such reports are coincidences, unverifiable, impossible to replicate – or just plain hogwash.

But they still make a good story.

Loftus Hall cuts a desolate dash on the Hook Peninsula. And somewhat creepily, there is said to have been a dwelling on the site since 1350 – almost 666 years.

Its most chilling story concerns a dark stranger who was called to the mansion one foggy night in 1765.

Lost on the Hook, the stranger was invited into the then-Tottenham household, and soon found himself playing cards and making an impression on a daughter of the house, Anne Tottenham.

As the stakes grew higher, Anne dropped her cards onto the floor. Dipping down to recover her hand, she saw that the stranger had a cloven hoof.

Unmasked as the devil, the stranger is said to have bolted through the roof in a ball of fire.

“The very same roof has been irreparable ever since,” says Aidan Quigley, owner of Loftus Hall.

Quigley, who acquired the house in 2011 and has been developing it into a visitor attraction on the Hook Peninsula since, revealed the Irish Ghost Hunters’ findings in advance of its seasonal re-opening for 2015 – so there’s assuredly a hint of theatrics behind the latest tales of terror.

Loftus Hall has its skeptics, and other buildings (such as Leap Castle, for instance) vie with it for the title of Ireland’s most haunted, but it continues to throw up crashes and bumps in the night.

Last year, it hit the international headlines when tourist Thomas Beavis, 21, snapped what appeared to be a ghostly apparition (below) in a window of the Hall.

The figure, claimed to be that of Anne Tottenham, quickly went viral.

“I zoomed in to find this girl in the window,” Beavis later said.

“I had to take some time before I showed it to everyone just because I didn’t really understand what I was looking at.”

Skeptics might wonder why the face of the ‘ghost’ appears sharper than the girl in the pink top, whether it’s a reflection, or just call it a hoax.

Quigley insists, however, that he and his team continue to notice “strange goings-on… such as light bulbs not working and frosty temperature drops in certain areas of the house.”

So is it, or isn’t it, Ireland’s most haunted?

Or, A Ghost Appears In Tourist’s Photo

Written by Ollie McAteer in August 2014 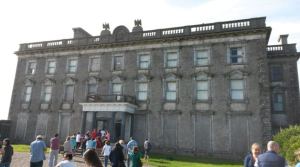 A tourist who visited a notorious haunted mansion in Ireland believes he may have photographed the ghost of a little girl.

Thomas Beavis, 21, from Lewisham, made the spine-tingling discovery as he flicked through his camera on the drive home from Loftus Hall in Wexford.

He took the snaps for his mother while on a tour with his friends – but captured what could be the spirit of little Anne Tottenham and the spooky face of an old lady in a window next to the front door.

He told Metro.co.uk: ‘I only really looked at the photo while we were driving home – I was actually stunned.

‘We were all feeling a little edgy from the tour but when I showed the photo to my friends we freaked!

‘I zoomed in on all the windows to find this girl in the window. I had to take some time before I showed it to everyone just because I didn’t really understand what I was looking at.’

Stories suggest that the Tottenham family moved into the mansion around 1766.

But the youngest, Anne, fell ill after an encounter with a demonic spirit.

She was shunned by her family and locked away in a room in the huge estate until she died.

At first glance the holidaymaker thought it was someone’s reflection, but on closer inspection he noticed that the suspected ghost is looking the opposite way to those outside the house.

Mr Beavis added: ‘I got chills, and still do. The girl could be the spirit of Anne Tottenham still walking around Loftus Hall. It could have been some strange occurrence because of a supernatural power, but I don’t know.

‘Normally I am a guy that believes in what he sees, but with this, I still don’t understand what’s going on in that photo.’