Or, Peek Inside The Haunted Spirit House

Visit the original article here. Or continue reading for the full story. 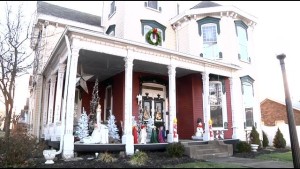 Nestled in Scott County is what appears to be a normal house, wonderfully decorated for Christmas.  But lurking inside is a secret.  Well, not necessarily a secret since it’s known around the county to be haunted.

The homeowners are used to it, but there’s proof that at one point, whoever lived there before was certainly frightened by whatever mystery was hiding between the walls.

Homeowner Dean Jessie says that if you just stick around long enough, anyone will be able to see why it is refereed to as The Spirit House. “I would say 3 or 4 times a week it could be in the daytime or the or it could be in the evening that you would experience the spirits in this house,” says Jessie. He’s lived there for ten years and says that he’s not alone. Jessie claims that there are five spirits there with him; a man in the basement, two maids, a little girl on the third floor and … Maggie.

“She built this house. This is her dream, and I could understand why she would be attached to this house,” said Jessie about Maggie.

But there are some things in his house that even Jessie doesn’t understand.  There are rooms that were completely sealed off, staircases leading to the third floor that were removed and bizarre markings above every single door. Jessie describes the markings as “ancient symbols for protection from evil spirits.” He’s convinced that there was something that happened there that everyone was afraid of and that’s what’s keeping the mystery in this house in Scott County.