Or, Landlords Call In Ghostbusters For Help 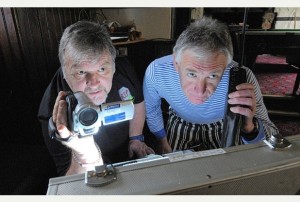 A landlord has called in the ghostbusters claiming his pub is being haunted – by William SHAKESPEARE.

The ‘Real Investigators of the Paranormal’ have visited the Jolly Sailor in East Ogwell, Devon, to seek out a ghostly figure that has been haunting the bar.

Landlord John Turner said he didn’t believe in ghosts until he took over the Jolly Sailor but was keen to find out more about its history.

He said: “It’s a friendly ghost, we just want to find out more about him. The figure looks a bit like a William Shakespeare.

“Now that these discoveries have been made, hopefully we’ll be able to find out more about the history of the ghost and where it might have come from.”

Chris Marshall, chairman of Real Investigators of the Paranormal, said its mediums detected a priest and two monks in the bar, along with a young man.

He said: “They also connected with the names Loar Wakefield, a William Webber and a John Webber.

“A few orbs were also spotted and dark shadows were noticed in the skittles alley.”

The Jolly Sailor dates back to the 13th century when sailors would come inland to avoid the press gang.

Or, Visit A British Haunted Pub

Is the Leopard Pub in Burslem Haunted?

Written by Colette Warbrook in Jan. 2015 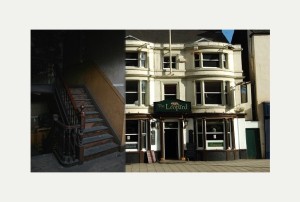 A FEW months back, I took a younger friend to Burslem and was surprised to learn that he had never patronised the revered Leopard in Market Place.

In a jiffy, I had dragged my friend Kevin into the hostelry and ordered some drinks while he looked around his “new pub”.

It wasn’t long before he told me he felt unsettled, explaining that he could sense an unhappy presence.

At this stage, I should reveal that Kevin appears to be sensitive to such phenomena, as he claims to have seen a non-corporeal young girl in his Pittshill house on many occasions – as indeed have his wife and two children.

I introduced him to Sharon Crisp, the Leopard’s landlady, with whom he cheerfully swapped notes about creepy experiences.

Sharon and her team often advertise ghost tours at this historic pub.

Some of the unlit – and largely unused – upstairs rooms have been draped with such as fake spiders’ webs, and you’ll even find a representation of the alleged Burslem Witch, Molly Leigh, to further enhance the entertainment value.

And this is the point. Are the ghost tours a bit of harmless fun, or is the Leopard really haunted?

My visit with Kevin triggered a follow-up visit by about 14 members of Burslem History Club, who were given an extensive tour of the building just before Christmas.

I’m lucky enough to possess an architect’s plan of the Leopard as it was in 1903, and the upper floors have changed relatively little.

Our guide related various incidents that had allegedly occurred in the pub, including the inexplicable flinging of a horse statuette that normally sits on top of the mantelpiece in one of the front rooms.

All this was prime fodder for the team of Most Haunted, who filmed at the Leopard in 2007.

Then again, I’d be highly dubious of that television programme’s angle on things.

Just before production began on the Leopard segment, one of their team rang me and told me they were thinking of running with the story that Molly Leigh – who they claimed was well-known in the Leopard – had been put on trial as a witch in Burslem Town Hall.

I pointed out that at the time of Margaret’s death in 1748 – at the age of 24, incidentally – Burslem’s first town hall was still about 13 years in the future.

Burslem History Club members survived the tour without beer mats being thrown at us, or hairs standing up on the tops of our heads. However, one of our lady members commented that she had definitely sensed a presence.

I am a firm believer in the idea that some people are more psychically receptive to these things than others, such as this lady and my friend Kevin.

There is a rational explanation for most things, but this is no reason to dismiss my friends’ observations.

On the night when Kev and I visited, Sharon permitted us to go up to one of the landings.

My friend took a number of inquisitive steps forward, while I stood at the top of a staircase.

The strange thing is that I began to feel very cold down my left side, and even when we returned below for a drink, I felt a sense of unease that I had never previously experienced in a pub.

Someone asked me during our ghost tour whether I could handle a sleep-over at the Leopard. I have to say that a cage-fight with Mike Tyson might be preferable.

Or, How To Buy A Piece Of British History 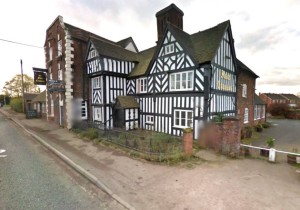 You can take your pick – a drunk ghost called Charlie, a heartbroken damsel called Emily, a Roundhead soldier spirit or a black eyed little girl dressed in rags..

This menagerie of poltergeists live in the now abandoned Staffordshire pub, the Four Crosses which dates back to 1636.

This property with its 10 bedrooms and a car park with a capacity for 80 vehicles will set you back a value-laden £325,000.

If you are interested and have children, just make sure none of them ‘can see dead people.’

Chris Arnold, who runs ghost-themed events said of the haunted pub: ‘I have hosted events at haunted buildings throughout the country and I have to say the Four Crosses Inn is probably the most haunted.

‘We have experienced so much there but a piano playing by itself on command was the most dramatic.’